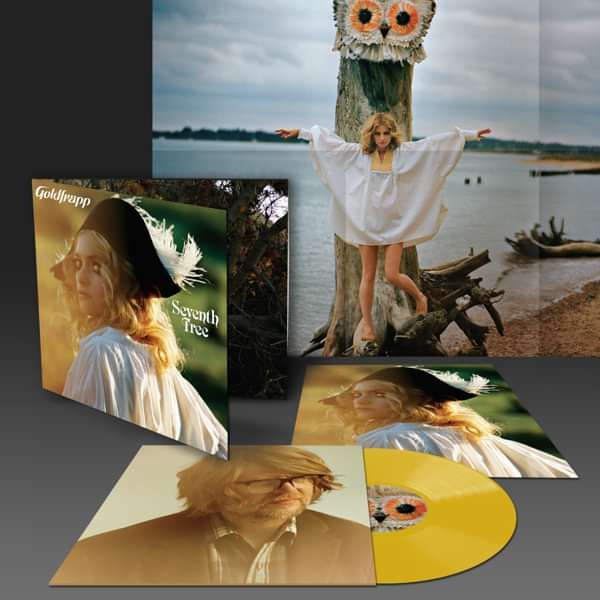 180g Yellow vinyl Gatefold sleeve Additional art print Exclusive bonus A1 poster (folded) - only available from Mute Bank "...an album as hummably lovely as it is knowingly referencing of a certain tradition of neo-psychedelic English whimsy." - The Observer

Mute / BMG announce the long-awaited vinyl reissue of Goldfrapp's fourth album, Seventh Tree. Out on 5 March 2021, this is one of a series of Goldfrapp vinyl releases on special edition coloured vinyl.

Originally released in February 2008, Seventh Tree has been out of print for many years and will be reissued here as a yellow vinyl pressing with the original artwork by Alison Goldfrapp and Mat Maitland with photos by Serge Lebon, packaged in a gatefold sleeve and full colour inner sleeve with lyrics, an art print and exclusive to MuteBank an A1 poster as featured on the original pressing.

Includes the singles 'A&E', 'Happiness', 'Caravan Girl' and 'Clowns', the album was written by Alison Goldfrapp and Will Gregory and recorded at their own studio deep in the English countryside.

Seventh Tree followed the glitterball glamour of platinum-selling album, Supernature (2005), and is very much its sensual counterpoint. Where its predecessor came cocooned in style and sex, Seventh Tree emerges gilded in the butterfly colours of an English surrealism. It shimmers and shines with the warmth of a hazy summer, an electric whirlpool of sound over which Alison's glistening voice soars.

Alison Goldfrapp described the album as "English romanticism with a hint of California sunshine." while Will Gregory called it "heartache dressed in ten louche outfits".

This is a pre-order and will be dispatched in line with the release date. Orders are not part shipped so if you wish to order other items with a different release date we recommend placing a separate order.